Several problems have cropped up during the planning and building of this shed. Some are the boring council-being-very-unhelpful-and-making-you-get-SIX(yes, six)-separate-permits-to-build-a-smaller-garage-than-what-was-originally-there-and-despite-every-other-house-in-the-laneway-having-a-double-garage-or-bigger kind of problems, which I won’t bother talking about. I will mention some of the more interesting problems over a series of posts though. So, get ready for some frustration!

I mentioned in a previous post entitled Moving Vegetable Boxes about how we gained a little extra space with our new fence and wall so Adam moved the vegetable boxed back to optimise that space. And he made them PERFECT. Cut to Shed Problem #1: The excavator bumped the front box right off line.

Ahh, so annoying! Adam debated whether he could jack it up to fix it, but it needed to be tilted and turned and we didn’t want to risk breaking it. So the best way to fix it was to empty it and realign it again. So, that would mean each box has been emptied and realigned twice in the last month or so! (The first reason for this is explained in the previous vegie box moving post). 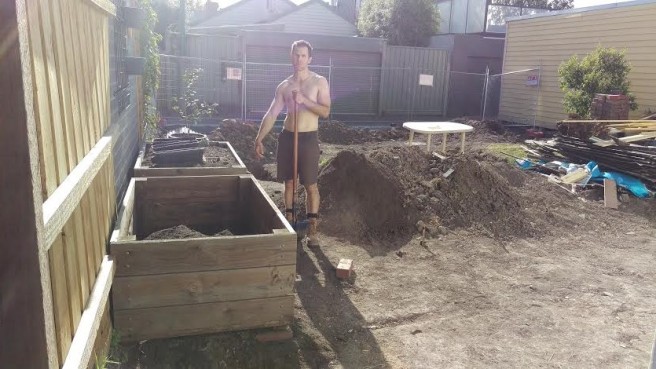 Better add in an action shot. Sorry that he took his top off. A hot, sweaty, dirty, shirtless Adam is not heaps blog appropriate. That’s why I only put in two photos. And made them big ;). 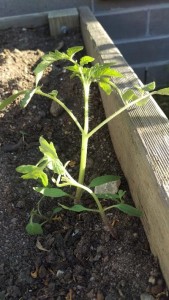 Look what sprouted up the other day: A tomato seedling! It survived the soil being shoveled in and out of this box twice and managed to self sow itself right on the very edge of the box! Good work little guy!

One thought on “Backyard Reno Problem #1”