Ah, my muscles ache, there’s dirt under my nails and my hands are hanging out for a decent lather of moisturiser. It feels so long since I had this feeling and I’ve missed it. My uni course is officially over! Results came out yesterday and I passed with distinction (76.25 average). Not amazing but I’m pretty happy with that given how busy I was first semester and how much I hated Deakin University in second semester (another story). I’ve put my books away and can’t wait for the extra $1.40/hour I will receive as a result of my new qualification. #nursebuysasuperyacht

So with that behind me and my super yacht fund set up I can concentrate on the turning our disgraceful backyard into something beautiful. The hubby ordered some Palmetto turf to arrive on Friday. It’s meant to be hardy, self repairing, soft, low maintenance and stay green over winter – what more could you want! So I had to turn our well trampled and dry dirt pit into something ready for some lovely grass to sink it’s roots in. Believe it or not this soil was brought in just for this occasion in February so it’s actually really nice soil – just looks (and kind of feels) like concrete in this picture.

Several people will tell you that I’m really bad at digging. I’ve had to be rescued in the past when deadlines are involved. I try really hard and get really sweaty and sore but I don’t make much of an impression. It took so much work to get the soil looking like this!

I’d been digging for 3 hours and hadn’t even reached the Maggie’s garden bed from the back fence. Adam came home from work and had a quick dig before asking me what my technique was “cos it’s really easy”. I hated him then but also had hope that he could knock the rest over quickly! He did the edges for me and made some more progress around Maggie’s garden bed before it got dark.

It did get easier – there was barely any topsoil near the back fence so I was digging mostly clay. Still took half the day to finish though! I don’t get it. I can shovel loose dirt from the front of the house to the back of the house no worries – had plenty of practice at it too! Just today I shovelled 1/2 a metre of nice soil for the vegie boxes and garden beds and I even got a thumbs up from someone waiting at the roundabout in their car. I just can’t dig to save myself! Even with Lloyd’s help – which I devastatingly had to say no to cos digging is not allowed. This was very confusing. “Mummy can dig, why can’t I?” Lots of fast laps were required. #puppyparenting

Speaking of Lloyd, I badly underestimated him in my first attempt to puppy proof the vegie boxes. I thought it would be good to use a fence to stop him but I didn’t want something too high that would make it hard to work in the vegie box and shade the plants. I saw this cute garden edge in Bunnings – actually, it’s not cute, it’s plastic and horrible but at least it’s not chicken wire. I thought the points of the pickets would scare Lloyd off attempting to jump without impaling him if he did attempt. He does get scared of things (like concrete wombats and Labrador puppies) but he’s not scared of potential pain. He’s a cattle dog. He doesn’t feel pain. Perhaps I should just buy a Labrador statue to guard the vegie boxes! 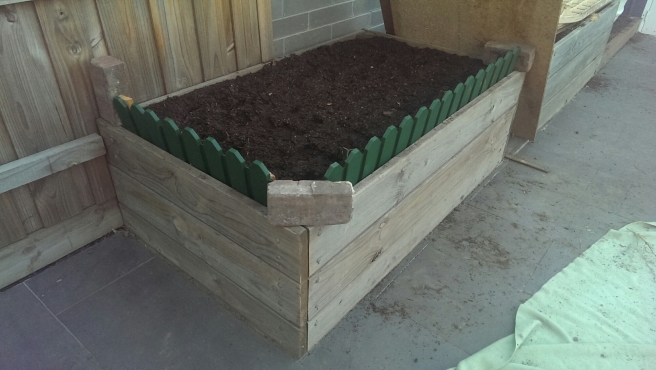 Not sure what my next puppy proof attempt will be. A higher fence that covers the corners? Might have to mull it over with my engineer husband.

6 thoughts on “My Garden Muscles Are Alive! ”