So, my brussels sprouts are finally getting to a decent size. The only problem is the caterpillars! They have gotten right into the sprouts! Hortico spray doesn’t get to them, and short of peeling away the layers of sprout, I can’t pick them out and squash them with my fingers. And all the little holes they leave in the sprouts allows dirt to get right in there and it’s impossible to clean the sprouts properly without peeling the sprout apart. 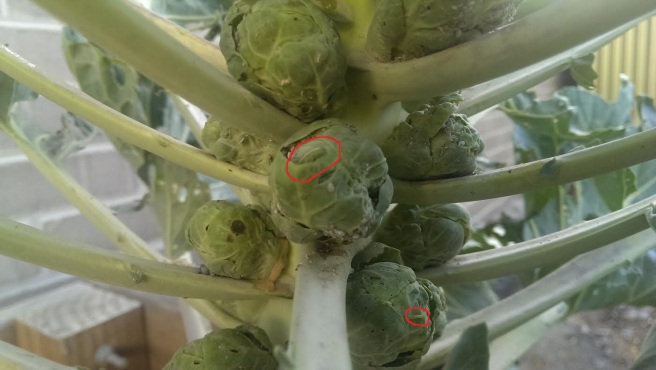 I personally have never minded a bit of dirt in my food so I cleaned the sprouts as best I could and cooked them up anyway. A couple of caterpillars drowned in the process. I got the sprouts pretty clean in the end. Even my hygiene fussy boyfriend ate them so they must have been ok! I’ve actually never cooked sprouts before. I thought I’d start off with something plain so I just boiled these in salted water for about 5 mins and served them with some butter. (Plus I wanted to boil away the dirt). They were a little hard still but tasted ok. Not the amazing home-grown sprout sensation I was hoping for though. This is only about a tenth of all the sprouts I have so plenty of opportunity to experiment with some sprout recipes. Next time I might fry some up with bacon. Bacon makes everything taste great!

My brussels sprouts are finally sort of starting to look like brussels sprouts! Man they’re slow! Hopefully they’ll get bigger quickly from now so I can eat them before it gets to hot and they go all floppy and open. They’re funny little things. 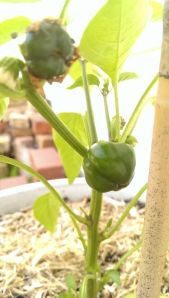 My first two tiny baby capsicums are starting to grow. That was fast! I only planted them a week ago! Hopefully the plant doesn’t spend all it’s energy making two little baby capsicums because the plant itself is still really little. It’s got some growing to do to make all the capsicums I’m expecting out of it!

My lime tree did it’s usual ‘winter death’ thing but the new growth is looking great! Is there anything I can do other than bring it inside to keep it healthy in winter? I feel like the warmer months are spent regrowing all the leaves that fell off in winter and by the time that’s done it’s winter again. It has only been two winters that it’s done it’s ‘winter death’ but that’s two out of two and I’m sensing a cycle. It gets a good mix of fertiliser including slow release, and I’m generally pretty on top of the aphids when they pay their visit, and it’s in a pretty sheltered spot in a pot with nice soil. I just don’t have the citrus touch!

Am I missing something? Do I need a boy and a girl brussels sprout plant or something funky like that? Or do I just need to be patient? I’m really looking forward to eating some homegrown sprouts! (cooked in lots of butter and bacon of course).