In a desperate attempt to keep summer going, I put a bunch of green tomatoes in a bag with a ripening banana. A week later some of them are starting to turn red! Yay! Come on fresh summer tomatoes!

I’m still getting precious red jewels popping out of my tomato plants! Some are coming in funky shapes and ugly skins but they still taste as sweet and amazing as ever! We’re thoroughly into autumn now – are they meant to be pushing out fruit for this long? I’ve probably got about 50 green tomatoes out there slowly ripening away. Should I make green tomato chutney or something out of them now the weather is cooler or just wait for them to go juicy and red?

I easily picked 1.5kg of tomatoes the other day and made Joanne’s napolitana sauce again. But this time I didn’t peel and deseed the tomatoes to see if it tasted much different. To be honest, I thought it was just as good and took me about 2 hours less time! I cooked the tomatoes for about 2 hours and the juices reduced just nicely. I even had to add about half a cup of water while I waited for Adam to come home.

Instead of basil (cos it died along with all my other herbs while I was in New Zealand), I used homegrown oregano that had been drying in our little butlers kitchen thing (our house is weird) for a few months. Tasted great! I actually prefer it to fresh oregano – the leaves are too furry for my liking.

I forgot to get a photo of the final product but it looked just like the last one! Recipe here.

(With tomatoes of course!)

Time to get my Italian on. My sister used to work in a fruit shop run by an Italian family. She was a fussy eater when she started there and didn’t like tomatoes. Oh, how quickly that changed! You weren’t allowed to be fussy there. They made it impossible to refuse offers of food. The owner, Peter, would follow my Dad around in the shop with various bunches of fruit and say things like “Warren, try these bananas, they’re beautiful” and put them in Dad’s shopping trolley. It wasn’t long before Dad realised that nothing was ever free, and while this seemed like a nice gesture at the time, he always had to pay for it at the register. Mum would often say things like “why did you buy paw paw?” and Dad would innocently say “Peter made me, I had no choice”, and he was right. There was no choice. So not only did my sister start liking tomatoes because not liking them was not an option, she also learnt about the wonderful things you could do with tomatoes. She worked there for many years and quickly became part of the family. She has dark hair and fair skin so many people actually thought she was their daughter. She worked there around the age when one starts to become interested in cooking and her fruit shop mum, Joanne started sharing recipes. Long story short, I tried cooking my first proper napolitana sauce using Joanne’s recipe and homegrown tomatoes.

The recipe says to use 1.5kg of Roma tomatoes, but I happened to have about 2kg of Romas and Big Reds so I used a combination.

It took me forever to take the tops off each tomato, score them, dip them in almost boiling water for 10 seconds, transfer them to an ice bath, then peel them. So labour intensive! The Roma tomatoes peeled a lot easier than the Big Reds. 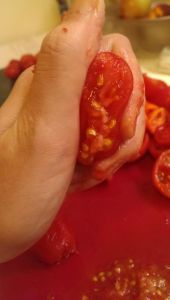 I then chopped each tomato in half and squeezed out the juice and seeds. This was also easier with the Roma tomatoes than the Big Reds because the Big Reds have so many intricate chambers of seeds.

After about an hour of tomato prep I could finally chop them up and chuck them in my saucepan. I cooked the sauce for about 3 hours and it made the house smell amazing! In 3 hours of cooking I probably only needed about one cup of boiling water to add to the sauce.

Homemade napolitana served on egg fettuccine, topped with basil and freshly grated pecorino. It would have been better with parmesan because the strong flavour of the sauce overpowered the pecorino, but I didn’t have any fresh parmesan. I licked my plate afterwards. And Adam kept opening the fridge and sniffing the leftover sauce. Must be a good sign!

Clever blog friends: I’m attempting my first proper napolitana sauce which meant squeezing the juice and seeds out of 2kg of homegrown tomatoes. I’ve kept most of it cos it feels like such a waste to throw it away. Any suggestions about what to do with about 200ml of tomato seeds in their juice?

The sauce is currently simmering away making my house smell sweet and garlicky. I shall post the recipe later (if it tastes good!)

Up until now the tomatoes have been coming in a nice steady stream of 4 or 5 a day. And between my boyfriend and I we’d easily get through that many a day. But yesterday’s harvest gave me about 30 tomatoes. True, I’d just done a couple of 12 hour shifts so I hadn’t picked any for a couple of days but still, that’s a lot of tomatoes! Time to get out the napolitana sauce recipe I think!

I did cook up about half of these last night into a very basic pasta dish courtesy of Jamie Oliver.

I love Jamie Oliver recipes because they are so simple and flavoursome. I was drawn to the roasting of the tomatoes for this sauce. So sweet and yummy! The recipe I used for this dish is here:

The tomatoes where homegrown (obviously!) and, when roasted, are the sweetest things in the world! This quiche seems really simple, but those roasted tomatoes made it taste pretty special.

And yes, it tastes as good as it looks (assuming you think it looks like the tastiest, sweetest, juiciest tomato you’ve ever seen). I’m so proud of my tomato plants! 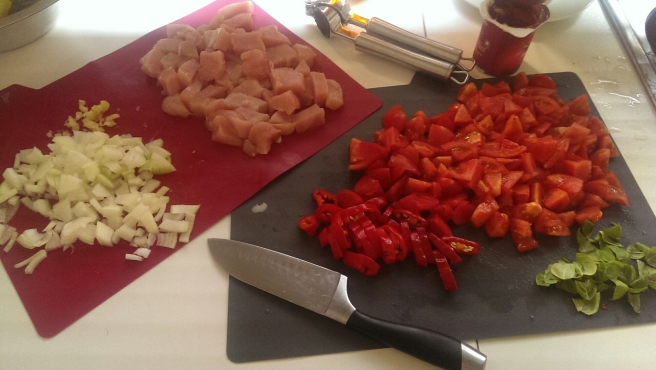 I wanted an excuse to cut up some of our home grown tomatoes into tiny pieces. They smell so good and sweet! So pasta sauce seemed like the obvious choice for tonight’s menu.

Side note: the chillies are from my friends, Steve and Elise. They’ve got a bit of spice to them too – good work guys!

This dinner has all the foods I love best all rolled into one! Basil, garlic, tomato, chilli, olives (something I have forced myself eat over and over until I like it and now I love it), and, of course, puff pastry! What could it be? Tomato pie! Recipe is here.

In the post with the recipe I said one pie serves two but it’s so yummy, you’ll want a whole one to yourself. Serve with lots of salad (also with tomato) and beetroot. Yep, it’s tomato season! 🙂